If you have read some of my other posts you know that F# is a favorite languge of mine so when I was going to create an Azure WebJob to handle messages from the Azure ServiceBus it felt natural to write it using F#. It all seemed as a great idea but along the way I found some issues both with the building and with the deployment which I tought I would share.

The first issue occure right away, I had just installed Visual Studio 2017 and all the Azure tools but there is no template for WebJobs and F# only for C#. But a WebJob is just a console application so I started of by creating a new console application.

My case was a very simple one, I was going to listen for messages on a Azure ServiceBus Topic and then relay that message to a given API endpoint.

To create a WebJob you need a Nuget package so I simply installed it:

The configuration of the WebJob is very simple, in my Program.cs file I created a new instance of the class JobHostConfiguration. The ServiceBus integration is added by an extension method for the config object by calling UseServiceBus().

Then you need to create a host and pass in the configuration.

The simpliest way to listen for messages is to create a function with a parameter that represents the incoming message and decorate that parameter with an attribute called ServiceBusTrigger. The attribute takes two arguments, the first being the name of the Topic and the other is which Subscription to use.

I created a new module to contain my function, the function can also take another argument of type TextWriter which lets you log information which will be avaiable to view in the Azure portal.

As long as you function is public it will automatically be discovered when the program runs as the entry point of the message from the ServiceBus.

I knew that the incoming message was going to be in a JSON format so I wrote a simple message parser that checks the message for information about what type of message is is and the parser returns a discriminated union with typed information about the message so I could use pattern matching to decide what to do with the message:

The sendUserAddedInfo is just a HTTP call that takes the message and passes it to another API.

The next step is to go to the Azure portal and create a new app service and you will also need a storage account. Once the app service is created you have a menu option called “WebJobs” if you click there and selects “+Add” in the top menu you will get a small menu (see picture). 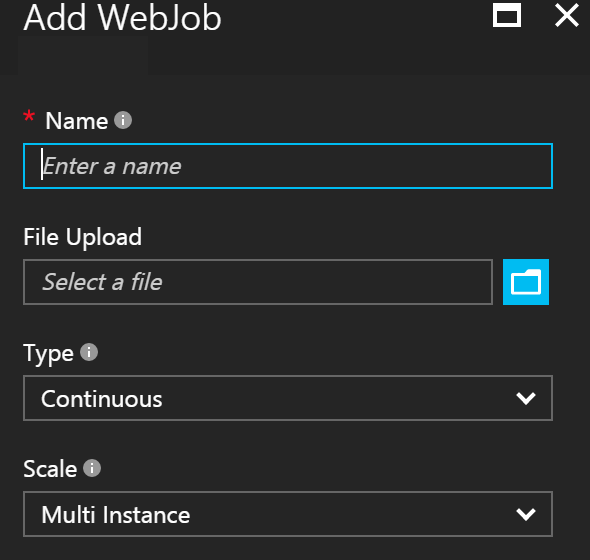 Give the WebJob a name and under “File upload” select the .zip file you created of the build output.

In my case I was going to continously listen for messages on the ServiceBus so my WebJob was of the the type “Continous” but you can also create a WebJob that runs like a CRON job.

If you don’t want to store connection strings in a .config file in your code you can set these in the “Application settings” for the app service we created.

As shown it is possible to work with WebJobs using F# but the workflow isn’t as polished as it is for C#. One might wonder why but I can’t shake of the feeling that Microsoft isn’t paying F# as much attention as it deserves, I guess we just have to wait and see if the F# community might fill the gap or we will have to wait for Microsoft to catch up.

You may also enjoy: